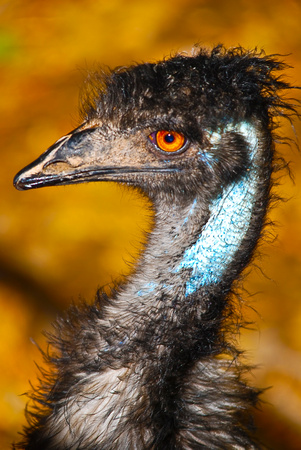 From Wikipedia:
The Emu, Dromaius novaehollandiae, is the largest bird native to Australia and the only extant member of the genus Dromaius. It is also the second-largest extant bird in the world by height, after its ratite relative, the ostrich. The soft-feathered, brown, flightless birds reach up to 2 m (6 ft) in height. The Emu is common over most of mainland Australia, although it avoids heavily populated areas, dense forest and arid areas. Emus can travel great distances at a fast, economical trot and, if necessary, can sprint at 50 km/h (30 mph) for some distance at a time. They are opportunistically nomadic and may travel long distances to find food; they feed on a variety of plants and insects.
The Emu subspecies that previously inhabited Tasmania became extinct after the European settlement of Australia in 1788; and the distribution of the mainland subspecies has been influenced by human activities. Once common on the east coast, Emu are now uncommon; by contrast, the development of agriculture and the provision of water for stock in the interior of the continent have increased the range of the Emu in arid regions. Emus are farmed for their meat, oil and leather.
�NatureGalleria.com
Powered by ZENFOLIO User Agreement
Cancel
Continue