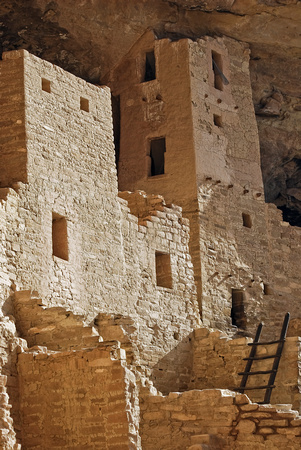 From Wikipedia:
Cliff Palace is the largest cliff dwelling in North America. The Ancient Pueblo structure is located in Mesa Verde National Park, in the southwest corner of the U.S. state of Colorado, home to the Ancestral Puebloans people.
Cliff Palace is a large, impressive ruin built into an alcove in a sandstone cliff. The alcove is 89 feet deep and 59 feet high (27 m x 18 m). The structure is 288 feet (88 m) long. There are about 150 rooms in the structure, although only 25 to 30 of those rooms had hearths, which would indicate that the room was used as living space. Although many of the remaining rooms were storage rooms, Cliff Palace incorporates many open areas and rooms whose function is not understood. In the upper level of the alcove there are nine storage rooms, which were built high, away from moisture and pests, and in which the surplus harvest could be stored. These storage rooms were reached by removable ladders. Based on the number of rooms with hearths, it is estimated that Cliff Palace was home to between 100 and 120 people, although some estimates range as high as 125 or 150.
There are several multi-story square and round structures called towers. These towers contain some of the finest masonry in the ruin. The interior of a four-story tower at the south end of the complex contains some original plaster on which some abstract designs were painted.
Cliff Palace Dwellings: Cliff Palace contains 23 kivas; round sunken rooms of ceremonial importance. One kiva, in the center of the ruin, is at a point where the entire structure is partitioned by a series walls with no doorways or other access portals. The walls of this kiva were plastered with one color on one side and a different color on the opposing side. Archaeologists believe that the Cliff Palace contained two communities and that this kiva was used to integrate the two communities.
Tree ring dating indicates that construction and refurbishing of Cliff Palace was continuous from c. AD 1190 through c. 1260, although the major portion of the building was done within a twenty-year time span. For unknown reasons, Cliff Palace was abandoned by 1300.
�NatureGalleria.com
Powered by ZENFOLIO User Agreement
Cancel
Continue