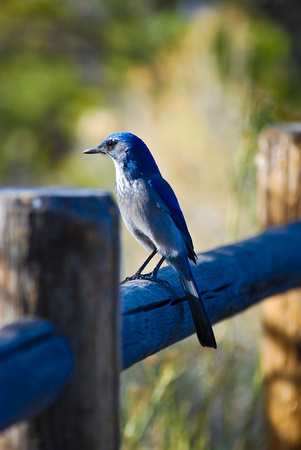 From Wikipedia:
The Steller's Jay (Cyanocitta stelleri) is a jay native to western North America, closely related to the Blue Jay found in the rest of the continent, but with a black head and upper body. It is also known as the Long-crested Jay, the Mountain Jay, and the Pine Jay. It is the only crested jay west of the Rocky Mountains.
The Steller's Jay shows a great deal of regional variation throughout its range. Blackish-brown-headed birds from the north gradually become bluer-headed farther south. The Steller's Jay has a more slender bill and longer legs than the Blue Jay and has a much more pronounced crest. The head is blackish-brown with light blue streaks on the forehead. This dark colouring gives way from the shoulders and lower breast to silvery blue. The primaries and tail are a rich blue with darker barring.
It occurs over virtually the whole of the western side of North America from Alaska in the north to Central America in the far south and east to south-western Texas, completely replacing the Blue Jay in most of those areas. Some hybridization with the Blue Jay in Colorado has been reported. The Steller's Jay lives in coniferous and mixed woodland, but not in completely dense forest, and requires open space. It typically lives in flocks of greater than 10 individuals.
Food is gathered from both the ground and from trees: the Steller's Jay's diet consists of a wide range of seeds, nuts, berries and other fruit. Many types of invertebrates, eggs and nestlings are eaten, and acorns and conifer seeds form a staple at some times of the year. It is a frequent visitor at picnics and camp sites.
The nest is usually in a conifer but is sometimes built in a hollow in a tree. Similar in construction to the Blue Jay's nest, it tends to be a bit larger (25 cm to 43 cm), using a number of natural materials or scavenged trash, often mixed with mud. Between two and six eggs are laid during breeding season. The eggs are oval in shape with a somewhat glossy surface. The background colour of the egg shell tends to be pale variations of greenish-blue with brown- or olive-coloured speckles. The clutch is usually incubated entirely by the female for 17 to 18 days.
Like all jays, its calls are varied and include rattling and guttural sounds too numerous to list. Notably, its alarm call is a harsh nasal "wah". It also imitates the cry of the Red-tailed Hawk, which has the effect of causing other birds and prey creatures to vacate feeding areas as the Steller's Jays approach.
This bird is named after the German naturalist Georg Wilhelm
�NatureGalleria.com
Powered by ZENFOLIO User Agreement
Cancel
Continue