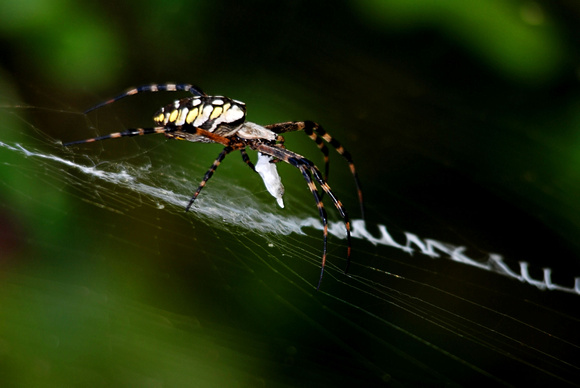 From Wikipedia:
Spiders are predatory invertebrate animals that have two body segments, eight legs, no chewing mouth parts and no wings. They are classified in the order Araneae, one of several orders within the larger class of arachnids, a group that also contains scorpions, whip scorpions, mites, ticks, and opiliones (harvestmen). The study of spiders is called arachnology.
All spiders produce silk, a thin, strong protein strand extruded by the spider from spinnerets most commonly found on the end of the abdomen. Many species use it to trap insects in webs, although there are also many species that hunt freely. Silk can be used to aid in climbing, form smooth walls for burrows, build egg sacs, wrap prey, and temporarily hold sperm, among other applications.
All spiders except those in the families Uloboridae and Holarchaeidae, and in the suborder Mesothelae (together about 350 species) can inject venom to protect themselves or to kill prey. Only about 200 species, however, have bites that can pose health problems to humans. Many larger species' bites may be quite painful, but will not produce lasting health concerns.
Spiders are found all over the world, from the tropics to the Arctic, living underwater in silken domes they supply with air, and on the tops of mountains. In 1973, Skylab 3 took two spiders into space to test their web-spinning capabilities in zero gravity.
�NatureGalleria.com
Powered by ZENFOLIO User Agreement
Cancel
Continue