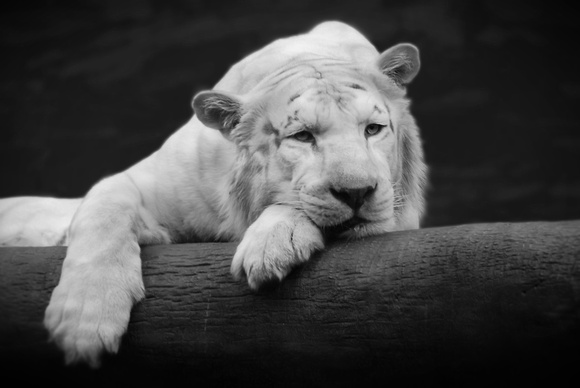 From Wikipedia:
White Tiger (Panthera tigris) is a tiger with a genetic condition that nearly eliminates pigment in the normally orange fur although they still have dark stripes. This occurs when a tiger inherits two copies of the recessive gene for the paler coloration: pink nose, grey-mottled skin, ice-blue eyes, and white to cream-coloured fur with black, grey, or chocolate-coloured stripes. (Another genetic condition also makes the stripes of the tiger very pale; white tigers of this type are called snow-white.)
White tigers do not constitute a separate subspecies of their own and can breed with orange ones, although all of the resulting offspring will be heterozygous for the recessive white gene, and their fur will be orange. The only exception would be if the orange parent was itself already a heterozygous tiger, which would give each cub a 50% chance of being either double-recessive white or heterozygous orange.
Compared to orange tigers without the white gene, white tigers tend to be larger both at birth and at full adult size. This may have given them an advantage in the wild despite their unusual coloration. Heterozygous orange tigers also tend to be larger than other orange tigers. Kailash Sankhala, the director of the New Delhi Zoo in the 1960s, suggested that "one of the functions of the white gene may have been to keep a size gene in the population, in case it's ever needed."
Dark-striped white individuals are well-documented in the Bengal Tiger subspecies (Panthera tigris tigris or P. t. bengalensis), may also have occurred in captive Siberian Tigers (Panthera tigris altaica), and may have been reported historically in several other subspecies. White pelage is most closely associated with the Bengal, or Indian subspecies. Currently, several hundred white tigers are in captivity worldwide with about 100 of them in India, and their numbers are on the increase. The modern population includes both pure Bengals and hybrid Bengal?Siberians, but it is unclear whether the recessive gene for white came only from Bengals, or from any of the Siberian ancestors as well.
The unusual coloration of white tigers has made them popular in zoos and entertainment that showcase exotic animals.
�NatureGalleria.com
Powered by ZENFOLIO User Agreement
Cancel
Continue