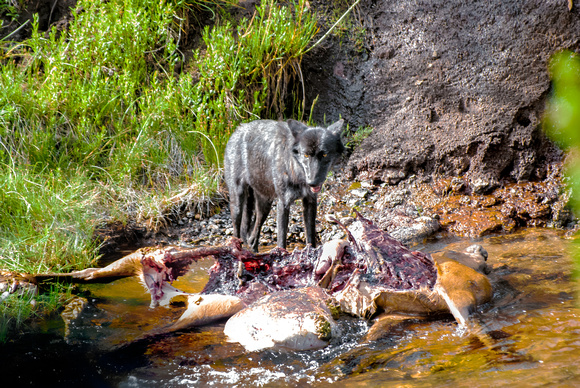 The gray wolf (Canis lupus) is a species of canid native to the wilderness and remote areas of North America, Eurasia, and North Africa. It is the largest member of its family, with males averaging 95?100 lbs, and females 80?85 lbs.[2] It is similar in general appearance and proportions to a German shepherd,[3] or sled dog, but has a larger head, narrower chest, longer legs, straighter tail and bigger paws.[4] Its winter fur is long and bushy, and is usually mottled gray in color, though it can range from nearly pure white, red, or brown to black.[3]
Within the genus Canis, the gray wolf represents a more specialised and progressive form than its smaller cousins (the coyote and golden jackal), as demonstrated by its morphological adaptations to hunting large prey, its more gregarious nature[5] and its highly advanced expressive behavior.[6] It is a social animal, travelling in nuclear families consisting of a mated pair, accompanied by the pair's adult offspring.[7] The gray wolf is typically an apex predator throughout its range, with only humans and tigers[8][9][10][11] posing a serious threat to it. It feeds primarily on large ungulates, though it will also eat smaller animals, livestock, carrion, and garbage.[12]
The gray wolf is one of the world's most well researched animals, with probably more books written about it than any other wildlife species.[13] It has a long history of association with humans, having been despised and persecuted in most agricultural communities due to its attacks on livestock, while conversely being respected by some Native American tribes.[12] It is the sole ancestor of the dog, which was first domesticated in the Middle East.[14] Although the fear of wolves is prevalent in many human societies, the majority of recorded attacks on people have been attributed to animals suffering from rabies. Non-rabid wolves have attacked and killed people, mainly children, but this is unusual, as humans are not part of the wolf's natural prey.[15] Deliberate human persecution has reduced the species' range to about one third, though its still relatively widespread range and stable population means that the species is not threatened at a global level, and is therefore classified by the IUCN as Least Concern.[1]
�NatureGalleria.com
Powered by ZENFOLIO User Agreement
Cancel
Continue