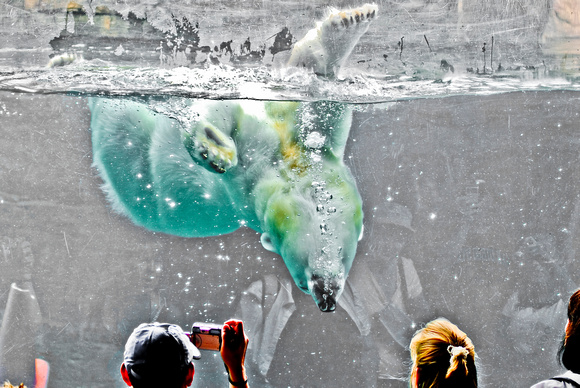 From Wikipedia:
The polar bear (Ursus maritimus) is a bear native to the Arctic. Polar bears and Kodiak bears are the world's largest land carnivores, with most adult males weighing 300-600 kg (660-1320 lb); adult females are about half the size of males. Its fur is hollow and translucent, but usually appears as white or cream colored, thus providing the animal with effective camouflage. Its skin is actually black in color. Its thick blubber and fur insulate it against the cold. The bear has a short tail and small ears that help reduce heat loss, as well as a relatively small head and long, tapered body to streamline it for swimming.
A semi-aquatic marine mammal, the polar bear has adapted for life on a combination of land, sea, and ice, and is the apex predator within its range. It feeds mainly on seals, young walruses, and whales, although it will eat anything it can kill. It is the bear species most likely to prey on humans.
The polar bear is a vulnerable species at high risk of extinction. Scientists and climatologists believe that the projected decreases in the polar sea ice due to global warming will reduce their population by two thirds by mid-century. Local long-term studies show that 7 out of 19 subpopulations are declining or already severely reduced. In the USA, the Center for Biological Diversity petitioned to up-list the legal conservation status of polar bears to threatened species in 2005. This petition is still under review.
�NatureGalleria.com
Powered by ZENFOLIO User Agreement
Cancel
Continue