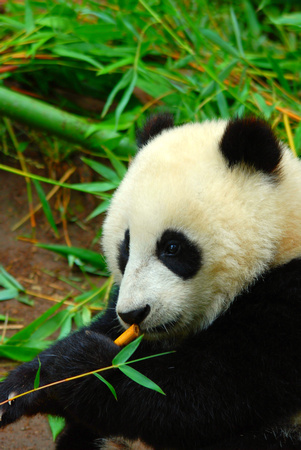 From Wikipedia:
The Giant Panda (Ailuropoda melanoleuca, "black-and-white cat-foot") is a mammal classified in the bear family (Ursidae), native to central-western and southwestern China. The panda was previously thought to be a member of the Procyonidae (raccoons and their relatives). It is easily recognized by its large, distinctive black patches around the eyes, over the ears, and across its round body. Though belonging to the order Carnivora, the panda has a diet which is 99% bamboo. Pandas may eat other foods such as honey, eggs, fish, yams, shrub leaves, oranges, and bananas when available.
Giant Pandas live in a few mountain ranges in central China, in Sichuan, Shaanxi, and Gansu provinces. They once lived in lowland areas, but farming, forest clearing, and other development now restrict giant pandas to the mountains.
The Giant Panda is an endangered species and highly threatened. According to the latest report, China has 239 giant pandas in captivity and another 27 pandas living outside the country. It also estimated that around 1,590 pandas are currently living in the wild. However, a 2006 study, via DNA analysis, estimated that there might be as many as 2,000 to 3,000 pandas in the wild. Though reports show that the numbers of wild pandas are on the ris
�NatureGalleria.com
Powered by ZENFOLIO User Agreement
Cancel
Continue