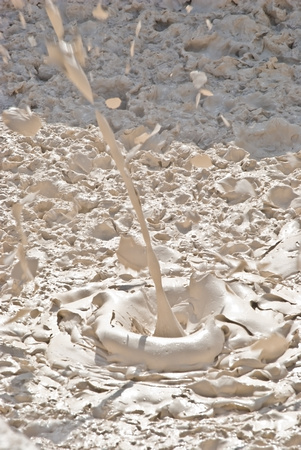 From Wikipedia:
The mud of a mudpot takes the form of a viscous, often bubbling, slurry. As the boiling mud is often squirted over the brims of the mudpot, a sort of mini-volcano of mud starts to build up, sometimes reaching heights of 3?5 feet. Although mudpots are often called "mud volcanoes", true mud volcanoes are very different in nature. The mud of a mudpot is generally of white to greyish color, but is sometimes stained with reddish or pink spots from iron compounds. When the slurry is particularly colorful, the feature may be referred to as a paint pot.

Mudpots form in high-temperature geothermal areas where water is in short supply. The little water that is available rises to the surface at a spot where the soil is rich in volcanic ash, clay and other fine particulates. The thickness of the mud usually changes along with seasonal changes in the water table.
�NatureGalleria.com
Powered by ZENFOLIO User Agreement
Cancel
Continue